Grant recipient Katie Hiew will be sharing updates on her Master’s thesis     work with yellow tang broodstock at the Oceanic Institute of Hawaii Pacific University under the advisement of Dr. Chad Callan.

“We have been busy the last month trying to get the trial tanks I’ll be using for my project up and running. We had 9, 4000L fiberglass tanks that needed to be reconfigured for this project. Through the process, we played around with a few different ideas for egg collection and finally found something that we think will work! I believe you can see the design in the video. During the reconstruction of the trial tanks, all the fish were housed together post-quarantine in a 30,000L fiberglass tank with flow through sea water and fed 5 times daily to begin conditioning them for spawning. Some very exciting news is that they have spawned a few times already! It has been less than 300 eggs total on each occasion, but there were viable eggs, so this is a promising start! I have attached a few pictures of their most recent spawn before we separated them into groups.

Once the trial tanks were completed, we waited until the full moon to begin making our groups, as it is generally easier to sex the fish during this time. Some of the fish were still a bit small and difficult to sex, but we were able to separate out enough to make 3 replicates of each sex ratio trial, as this is the first experiment I will be doing. We randomly selected 1 female and 1 male for the pair groups, 2 females and 1 male for the trios, and had only enough females to do the final treatment of 3 females to 1 male. They are still settling into their new groups and tanks, but now we’re finally ready to begin collecting data! Fingers crossed that in the coming months we’ll see more eggs! 🤞” 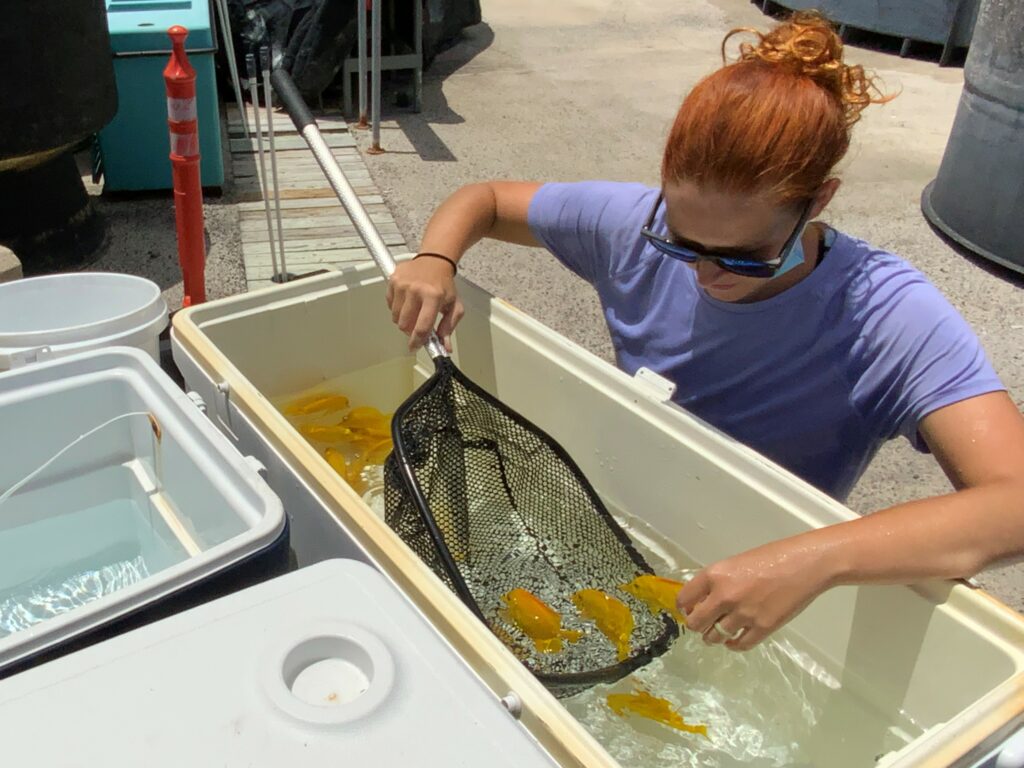 12 February 2021
“We acquired 40 wild yellow tang in January, prior to the closure of ornamental collections here in Hawaii. We found the largest of the fish available, most of which average about 11cm. This is just at reproductive size, but we were unable to visually identify sexes yet.

Since their arrival they have been undergoing quarantine and bi-weekly treatments to (hopefully!) rid them of any parasites. It took a few days to get them eating, but they now enjoy pellets, PE mysis, nori, and Y

ellow Tang Gel which I make special for all our yellows. We lost 2 during the process, and one seems to h

ave mysteriously disappeared. There is one that developed popeye and had to be removed from the group and treated separately, so I’m hoping it will recover. Yesterday was their final treatment, so we are now ready to move forward with getting the fish into their replicate groups and new tanks. 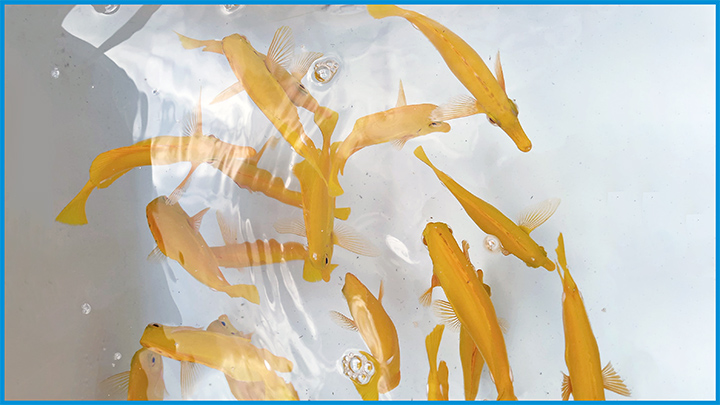 The first trial will look at different sex ratios (1:1, 1:2, and 1:4), so we will separate the chosen fish into these three treatments with 3 replicates of each. They will be housed in outdoor, 4T fiberglass tanks on OI’s flowthrough seawater. These tanks still need some adjustments made to them and we are working on a design for collecting the eggs within these tanks. In the past, it has taken quite some time to get wild yellow tang spawning anything viable, so that, combined with their relatively small size and the current winter temperatures here may be a challenge. I’m hopeful that after we get them settled into their new tanks and water temps start to come up over the next few months we’ll get some spawns so I have data to report.”

Update from the Oceanic Institute on the Yellow Tang, Zebrasoma flavescens