It has been several months since we talked about angelfish, but we are excited to have something new to share. What is it? We don’t quite know just yet, but we are excited. This little angelfish is 45 days old; its parents swimming somewhere in the Grand Reef exhibit at Discovery Cove in Orlando. 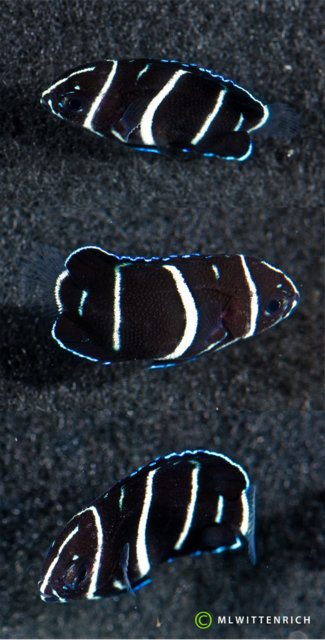 After an insightful conversation with Su Wen-Ping, owner of Bali Aquarich in Bali Indonesia, about the spawning behavior of his captive angelfish broodstock we began focusing our egg collections in the Grand Reef around the new moon. Denise Swider and her team collected around 140,000 pelagic eggs roughly two months ago a day after the new moon. The exhibit is home to some stunning angelfish including two pairs of P. annularis, a pair of P. maculosus and a few other pomacanthids. The exhibit is also home to 128 other species of marine fishes that spawn routinely. Finding an angelfish egg would prove very difficult. 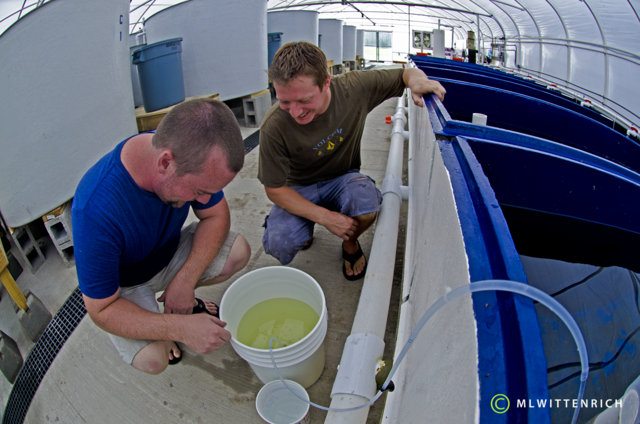 Todd Gill, a gifted intern from North Carolina, was in charge of raising larvae collected from  Discovery Cove. Within days, a single larva out of hundreds started looking different. It was darkly pigmented and behaved quite different from all the rest. Over the coming days and weeks it became obvious that Todd was raising an angelfish. This angelfish was reared in a 100 gallon black oval tank with ambient temperature/photoperiod of the greenhouse and offered wild zooplankton, Artemia, and a ton of dedicated effort to manage water quality. We will keep you posted as it develops.

Rearing of the Purple Masked Angelfish Using Only Cultured Food

Management, Spawning and Egg Collection of the Masked Angelfish