Hi Matt, and all,

WOW! Congratulations Matt, Eric, and Cristine. This is so great. The connection between the large aquariums and the research facilities is essential to the development of rearing technology of so many species, and DNA confirmation of species identity, just icing on the cake. Back in the 70s we would occasionally do a “wild egg rearing” from plankton samples and if they didn’t make it all the way through we had no idea of “what just happened”. Also keeping a brood stock of large species, such as Pomacanthus angelfish was, and is, impossible for most lab based facilities. The only way we could do it back then was to go out and collect adults in spawning condition, spawn them in the lab and then release them. It was difficult but possible. Mother Nature never makes things easy, angelfish were tough, you could collect them in a net, kick them around boat, drop them, squeeze and it didn’t seem to faze them (not that we did this…), but the larvae, very difficult to keep them alive. This new cooperation opens so many doors, but, of course, you have to be able to rear the larvae. 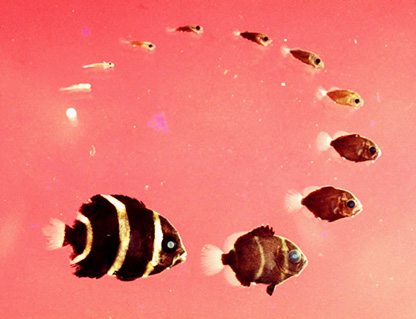 I’m retired now, but I don’t play bridge, so I still dabble in marine rearing work in spare room of my house, and I have something to report. I kept 3 Diadema from my rearing work of two years ago, just to keep the little guys around for company in the lab. It turns out that one was a girl and they spawned last Monday. This is the first time captive reared Diadema have spawned. They produced over 2 million eggs. I’m not ready start serious  rearing again, I’m still working on restructuring the water processing systems, but I am trying to keep them going as best I can. They are now in day 3, feeding actively on T. iso and Rhodomonas lens, and growing quite well. I have 300,000 in a 50 L culture vessel. I’ll have to reduce numbers by a third in a few days.  Aside from the academic interest in a first spawning of captive reared Diadema, there is significance to this event in that it demonstrates that captive reared Diadema can successfully reproduce and produce viable progeny. Perhaps it is obvious that a captive bred marine organism kept in an adequate environment with proper nutrition should and can spawn, but it is an important point to demonstrate that lab cultured adults can successfully reproduce because this will be critical to the future efforts in restoration of this critical herbivore to the reefs. One of these days I may get back to fish.

Eggs and Larvae from Public Zoos and Aquariums