Kevin P. Barden successfully defended his thesis today entitled Effects of temperature on the morphology of a marine fish larvae (Callionymidae: Synchiropus ocellatus). As a student of the Institute of Aquaculture at the University of Stirling in Scotland Kevin wanted to work with marine ornamental fish. Under the guidance of his major advisor Dr. Herve Migaud, the Institute’s Director of Research, Kevin reached out to Dr. Matthew L. Wittenrich about the potential to research a more tropical species. Soon, the paperwork was signed and Kevin was working at the Tropical Aquaculture Laborotory on culture bottlenecks of ocellated dragonets with Dr. Wittenrich as co-advisor.

Ocellated dragonets hold tremendous aquaculture potential. But, like most marine fishes captive larvae are prone to mass mortality events that are attributed to poor feeding performance during the transition from endogenous feeding (yolk abosrption) to exogenous feeding. Finding a suitable live prey organism that will be consumed by pelagic larvae with tiny mouths and exhibit a life history that is condusive to high density culture has become a major area of interest. Much research has focused on identifying and culturing new planktonic organisms. Kevin approached this bottleneck from a different angle, and instead, examined the influence of environmental (temperature) variables on the morphology of larvae. The goal was to use the fish’s natural physiology and metabolism to create a larger, more robust larvae that could accept larger, commercially available prey sources. 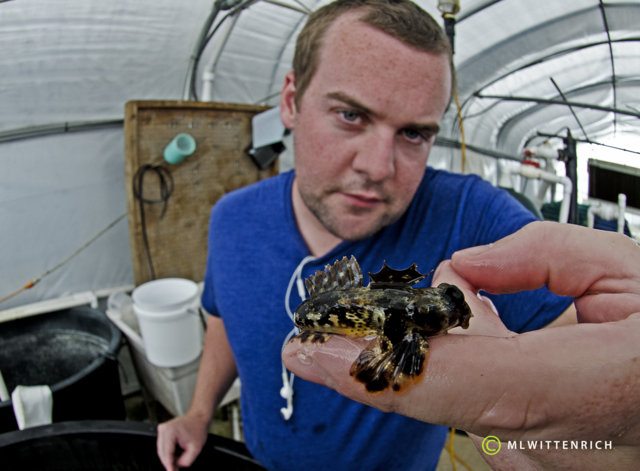 Male and female S. ocellatus are readily identified by their dorsal fins. Here, a female with short dorsal fin.

Kevin found that when dragonet eggs were incubated in cooler water the larvae hatched out significantly larger than those incubated in warmer water. They also exihibited a larger mouth and overall body dimensions. The Tropical Aquaculture Laboratory is excited about these findings and is continuing to explore their significance in marine ornamental aquaculture. Ocellated dragonet larvae are among the smallest marine fish larvae found in the worlds oceans. Larger larvae should feed better on larger, more readily available food. These techniques will hopefully yield a commercial protocol for raising large numbers of this and closely related species like the starry dragonet, S. stellatus.