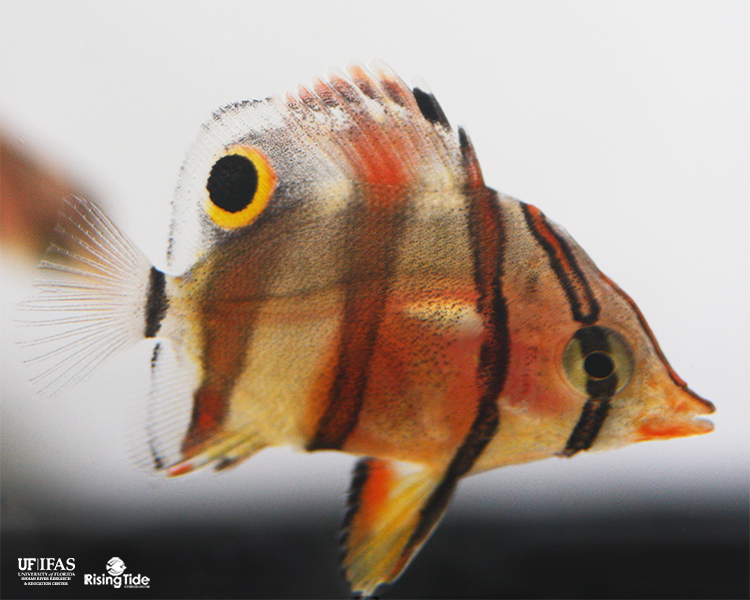 The UF/IFAS Indian River Research and Education Center, with Rising Tide Conservation, is pleased to announce the successful aquaculture of the copperband butterflyfish, Chelmon rostratus!

Copperband butterflyfish, Chelmon rostratus, can be found in the tropical Indo-Pacific, extending from Japan’s Ryuku Islands, the Andaman Sea across to Papua New Guinea, and along much of Australia’s northeastern/eastern coast.

Copperbands can reach lengths of around 20 cm (8 in) and have dramatic, distinct coloring with coppery, orange/yellow vertical bars set against a pearlescent white body. They have a black false eyespot outlined in blue, and a black band at the base of the caudal fin. Their prominent snout allows them to reach into small reef crevices for their prey, which includes anemones (Aiptasia sp.), polychaete worms, small crustaceans, and occasionally coral polyps.

They inhabit rocky and coral reefs down to depths of 25 m (~82 ft), though they commonly occur at shallower depths. Copperbands are territorial, and adults are found singly or in monogamous breeding pairs. There is some sexual dimorphism, males’ snout has “a small hump…and higher slope than female(s).”¹

Copperband butterflyfish broodstock pairing attempts started in 2017 with one successful pair, then additional potential broodfish were obtained in 2018. The pairing process began after the quarantine period. The fish did not show sexual dimorphism at the time they were acquired, so pairs, trios, and groups of four were stocked into shallow blue poly tanks. These tanks initially had clear dividers so the fish could see each other but were not in direct contact, and their behavior was observed closely over a few months. From these observations potential pairs were combined together. Bonded pairs were determined by additional behavior observations, with successful pairs following each other, swimming side by side frequently, and not displaying aggression. Individuals that did not form a bonded pair were separated and then attempted to be paired to other fish. Broodstock development took about two years once paired. Pairing occured when the fish were 5 – 6.5 cm (~2 – 2.5 in) in length, and spawning occured when the pair reached about 10 – 13 cm (~ 4-5 in) in length.

Currently, there are four bonded pairs of copperband butterflyfish at IRREC. One pair (henceforth referred to as “Pair A”), consisting of the largest-sized individuals, is spawning consistently. Another pair has spawned a few infertile eggs but is not consistently spawning yet. Two other pairs may not be sexually mature yet.

Light cycle: 14 hours of direct light with 3 hours of sunrise and sunset by ambient building lights.

Broodstock Pair A has been spawning two days in a row every two or three weeks for over a year. Initially, eggs were observed to be fertilized but the embryo did not develop properly. The improper development looks like a flower petal in the egg, so division is happening but development was ceasing at about the 32 to 64 cell stages for an unknown reason. This improper development has also been observed in different species of butterflyfish being studied at the lab. Collected eggs were held in a bucket with clean water and aerated and no further development occurred. Some eggs floated while others sank.

Eggs were collected in upwelling egg collectors and were always removed in the morning before feeding, then were held in 1 L containers with aeration. Quantity of fertilized and unfertilized eggs were estimated by counting triplicate volumetric samples under a dissecting microscope. It was observed that after holding the fertilized eggs, some would continue to develop into a proper embryo by late in the afternoon. This indicated that either the embryos develop slower than other species of fish (18-24 hours) or they spawned near dawn instead of sunset like most of the other species of fishes at the lab. We now believe the copperband broodstock Pair A spawns at pre-dawn or first light, similar to milletseed butterflyfish, Chaetodon miliaris, and the copperband eggs have a standard 18-24 hour embryo development.

The weekend of February 27, 2021, two spawns from Pair A were recorded, consisting of 55,186 eggs (3.98% fertilization) and 22,880 eggs (32.25% fertilization) with a hatch rate estimated around 10%. Newly hatched larvae are described as strong fast swimmers but small, a similar size to Pacific blue tang, Paracanthurus hepatus,  larvae.

Copperband larvae are housed in 29L fiberglass tanks, which have a white bottom and black walls. All tanks are part of the larger recirculating aquaculture system serving all larval tanks. Temperature is maintained at 25-26℃ (77-79℉) by room temperature control.

Eyes: Present but not pigmented, maybe not functional

Approx. 8 DPH- 30 DPH: Tholichthys stage. Larvae have notably short but deep bodies as compared to many other species of marine fish larvae. They have helmet-like head plates with 2 peaks, long operculum spikes, a small mouth, round caudal fin, and the dorsal fin is short in front and taller further towards the tail.

53 DPH: The eyespot has a partial copper ring forming and black bands are highly visible.

57 DPH: Copper bands visible within the black bands on the anterior half of the body and eyespot is encircled in a copper ring.

Aeration was moderate with a small airstone along the wall of the tank.

Lighting was fluorescent lights providing 750 lux of lighting at the water surface.

Flow thru water was turned off and tanks were left stagnant with only aeration from lights on to lights off. Then water was flushed throughout the entire night to attempt to remove uneaten copepods.

Screen mesh size on the drains increased as the larvae grew; they were 150 micron for the first 7 DPH, then 300 micron until 30 DPH, and finally were increased to 500 micron.

3 DPH: First day of feeding, 5/mL of parvo and rotifers once daily.

Adult copepods were added ad libitum and maintained at a visible presence density.