Grunts of the family Haeumulidae are undoubtedly some of the most economically and ecologically important fishes of the western Atlantic. Anyone that has donned mask and snorkel and submerged into the turquoise water of the Caribbean has surely encountered one of the family’s representatives. Fifteen species of grunts are found in the region and often dominate (numerically) shallow reefs. Their abundance on coral and rocky reefs, ledges and hard bottoms have led to a high value fishery (2.3 million pounds of grunts landed in Florida in 2005) and a greater understanding of the role these fishes play in food webs, both as predators and prey.  In aquariums, grunts have long been a favorite of public aquariums looking to create eye dazzling displays of underwater worlds. Schools of grunts, often numbering in the thousands, are a common site on Florida reefs. For species like the French Grunt (Haemulon flavolineatum), with a bright yellow body color set amidst horizontal and diagonal bands of fluorescent blue, this site can be simply stunning behind a glass pane.

Broodstock and Spawning
Despite the value and importance of this family little is known about the reproduction and early life history of the group. As part of the Rising Tide Conservation Initiative, the Tropical Aquaculture Laboratory has successfully raised five species of grunts. Development of culture techniques and development based photo guides have been hindered since most of our egg collection techniques have occurred in heavily stocked multi-species exhibits. This has made it extremely difficult to quantify the species and diversity of eggs we are stocking into larval tanks. Interspecific interactions among larvae and the different environmental and feed requirements have made it difficult to create species-specific rearing protocols.  Recently, the Tropical Aquaculture Laboratory partnered with the Seas with Nemo & Friends at Epcot Center, Walt Disney World to rear a large group of French Grunts for display, as well as develop the culture technologies that could make this commonplace. Disney’s research team found that their French Grunts were actively spawning in a behind-the-scenes research system and wasted no time hatching a plan.

According to Larry Boles, Disney researchers stocked 8 adult French Grunt measuring 10cm fork length in each of 6 replicated 660 liter recirculating systems. Within 3 weeks they observed spawning in all systems. Photoperiod was set to 12L:12D, water temperature around 26C, and water quality maintained with wet/dry biomedia and 20 micron cartridge filters. Water exiting the research tanks is gravity-flow to the biofilter through a dispersion bar onto a 100 micron prefilter material. Eggs spawned in the system make their way through the plumbing and collect on this filter material. Eggs are never totally submerged, but kept wet from the incoming water. The morning after spawning, Disney staff scrapes the eggs from the filter material with a metal spatula. Egg production was monitored by placing the eggs into graduated cylinders and measuring the total volume of eggs produced each day. From here, the eggs, now developing embryos, are placed in a 13 liter pail with clean seawater and transported to the Tropical Aquaculture Laboratory. 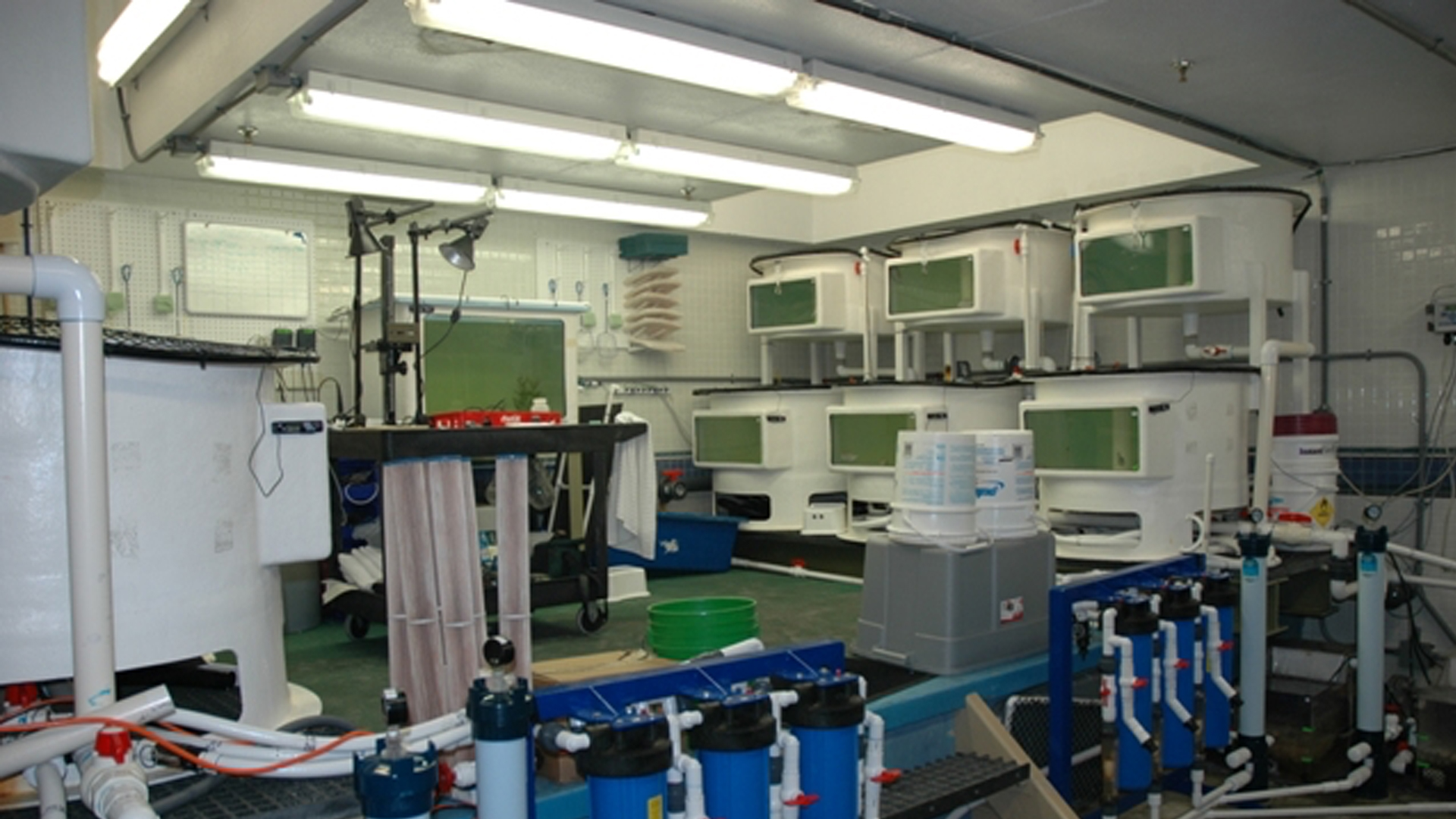 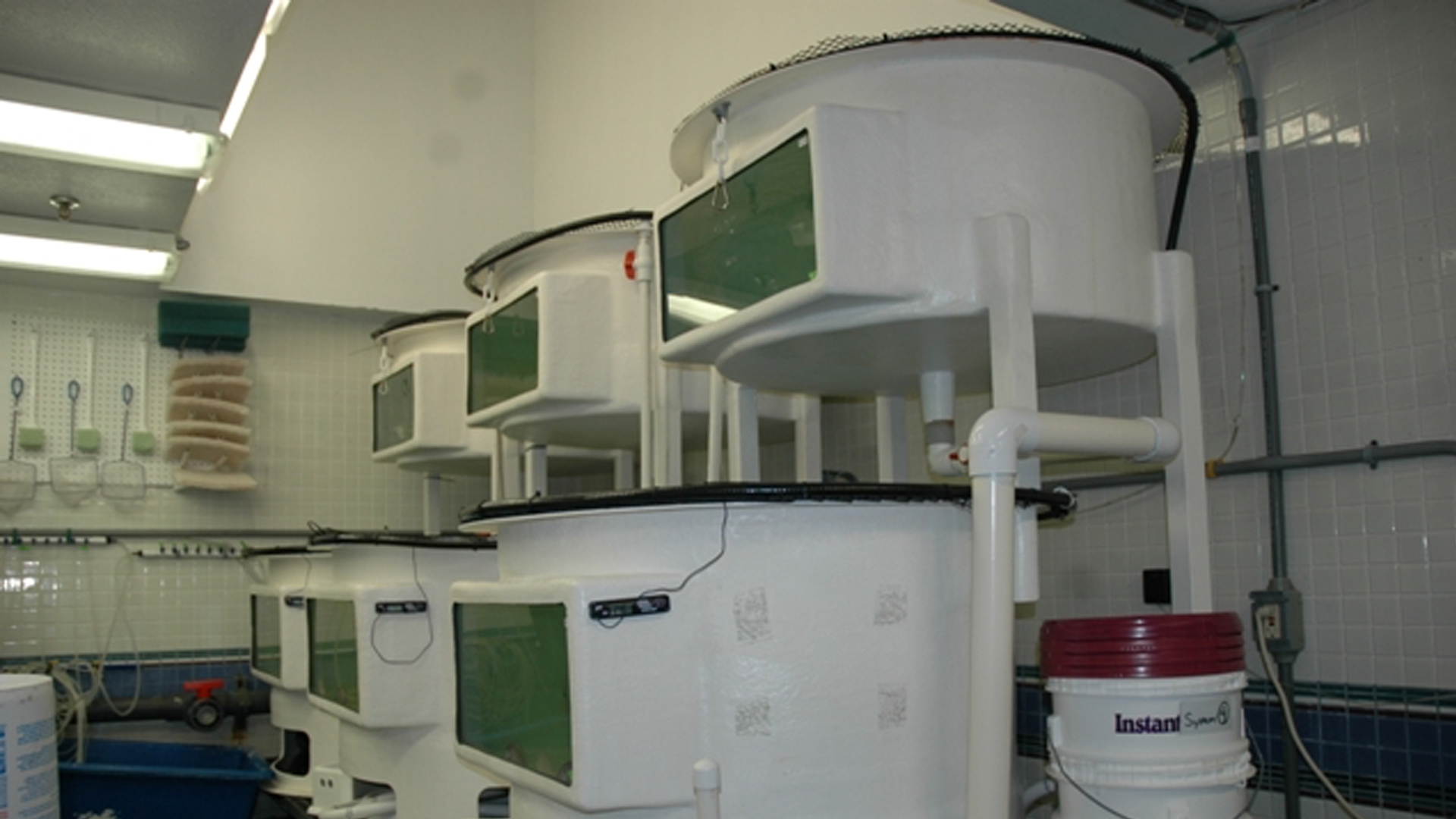 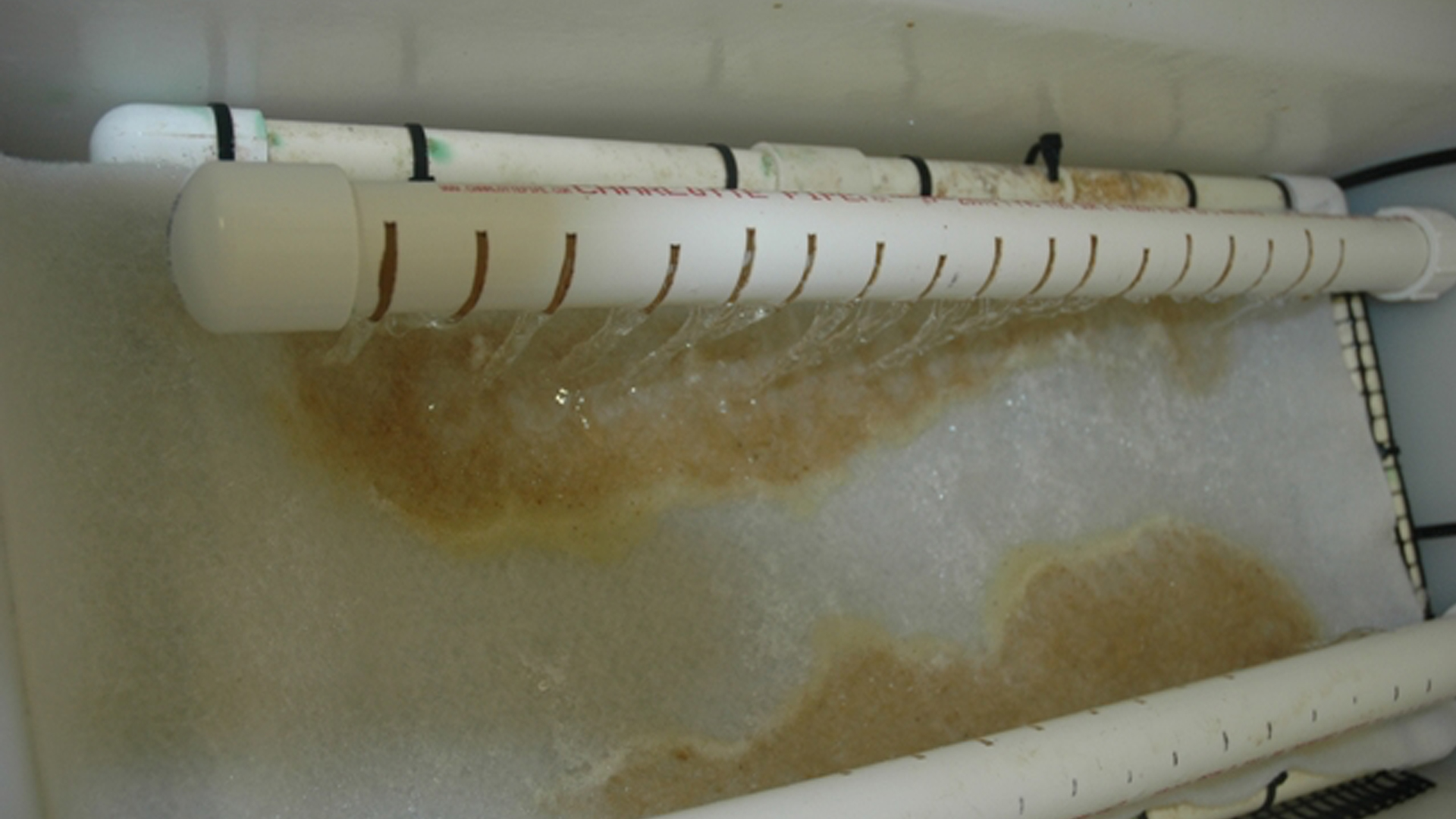 Gravity feed from broodstock tanks to biofilter. Eggs and debris are concentrated on prefilter material after spawning. Photo by Larry Boles/Disney 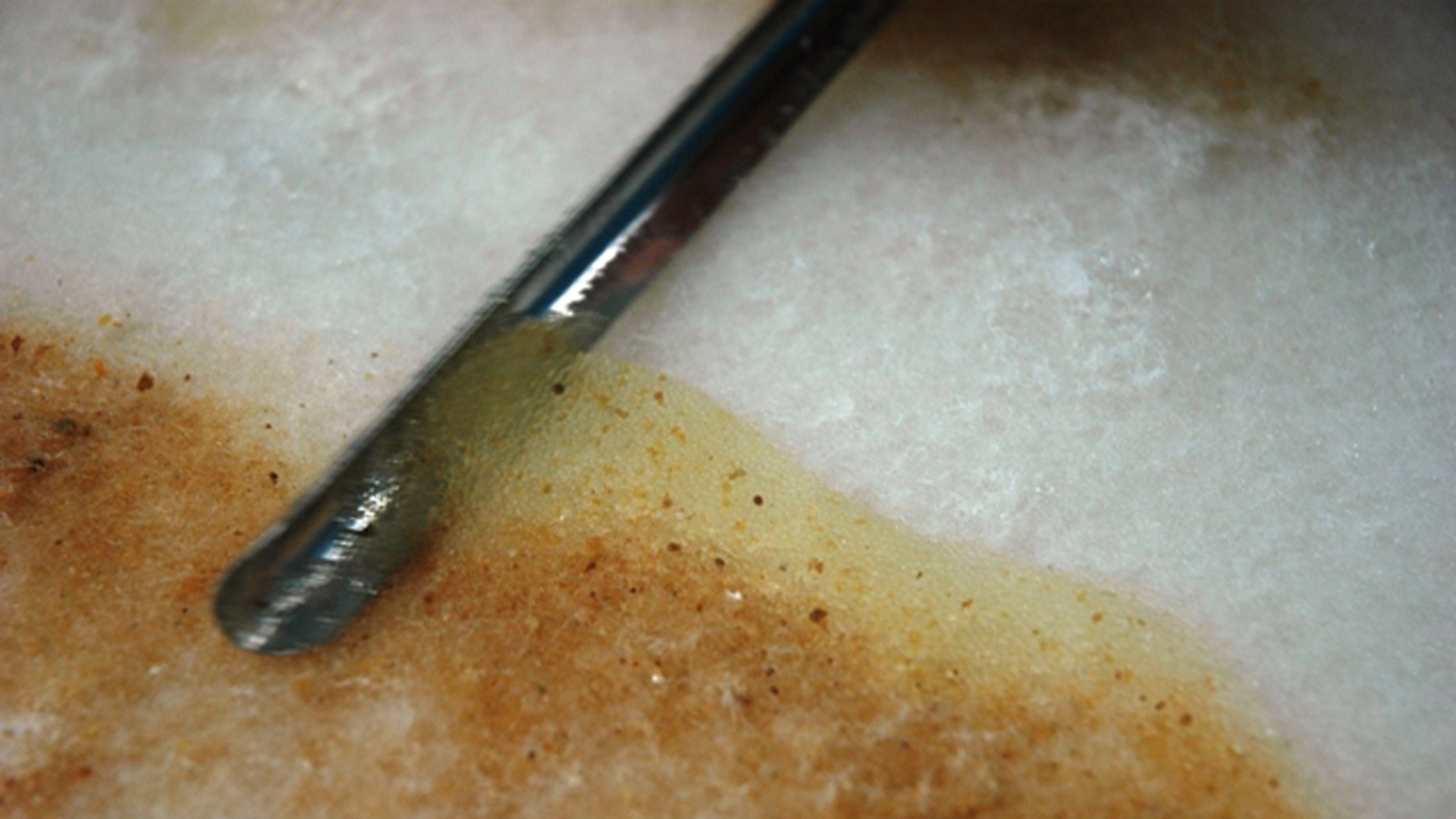 Eggs are removed from prefilter material with a metal spatula. Photo by Larry Boles/Disney 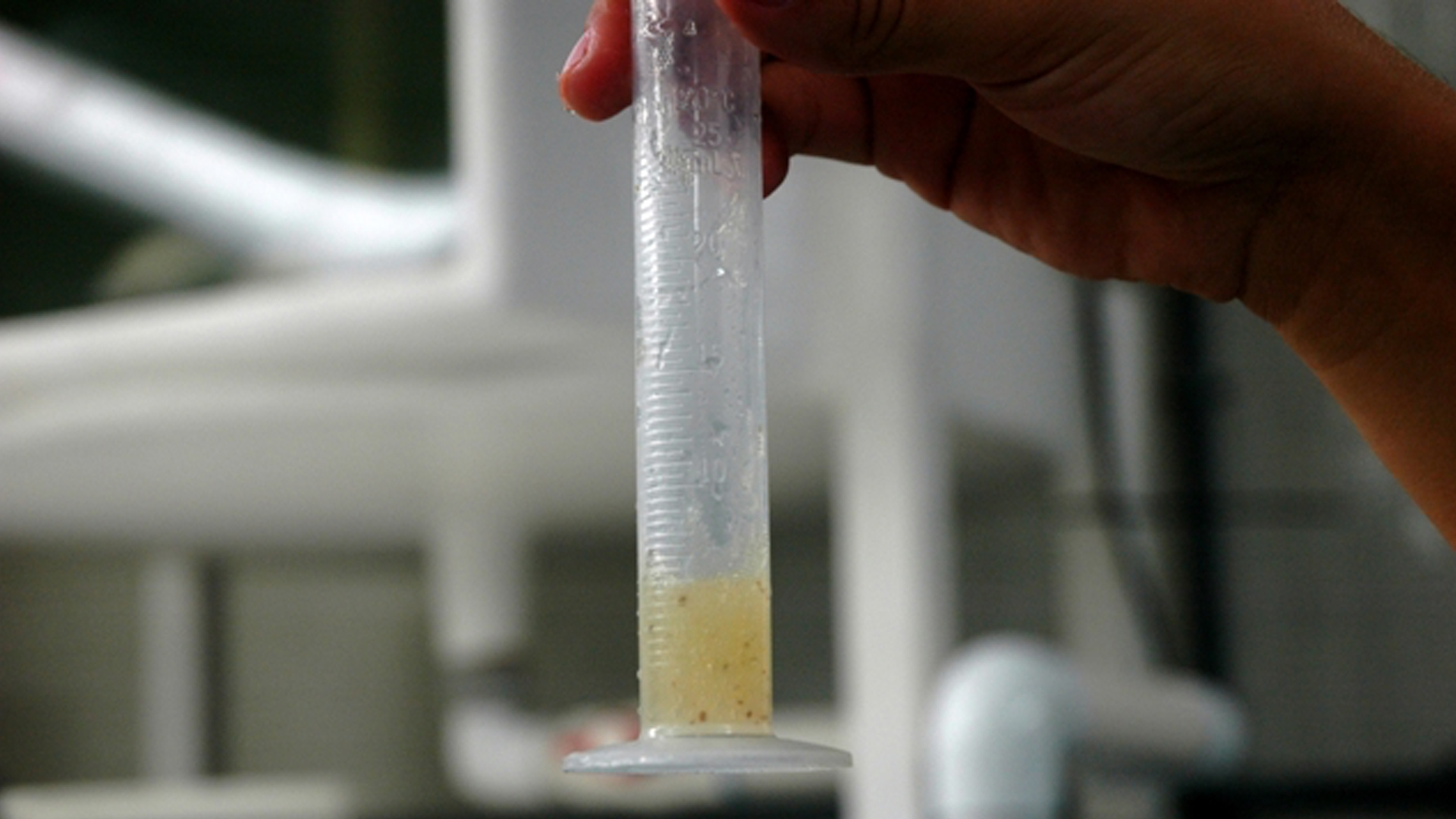 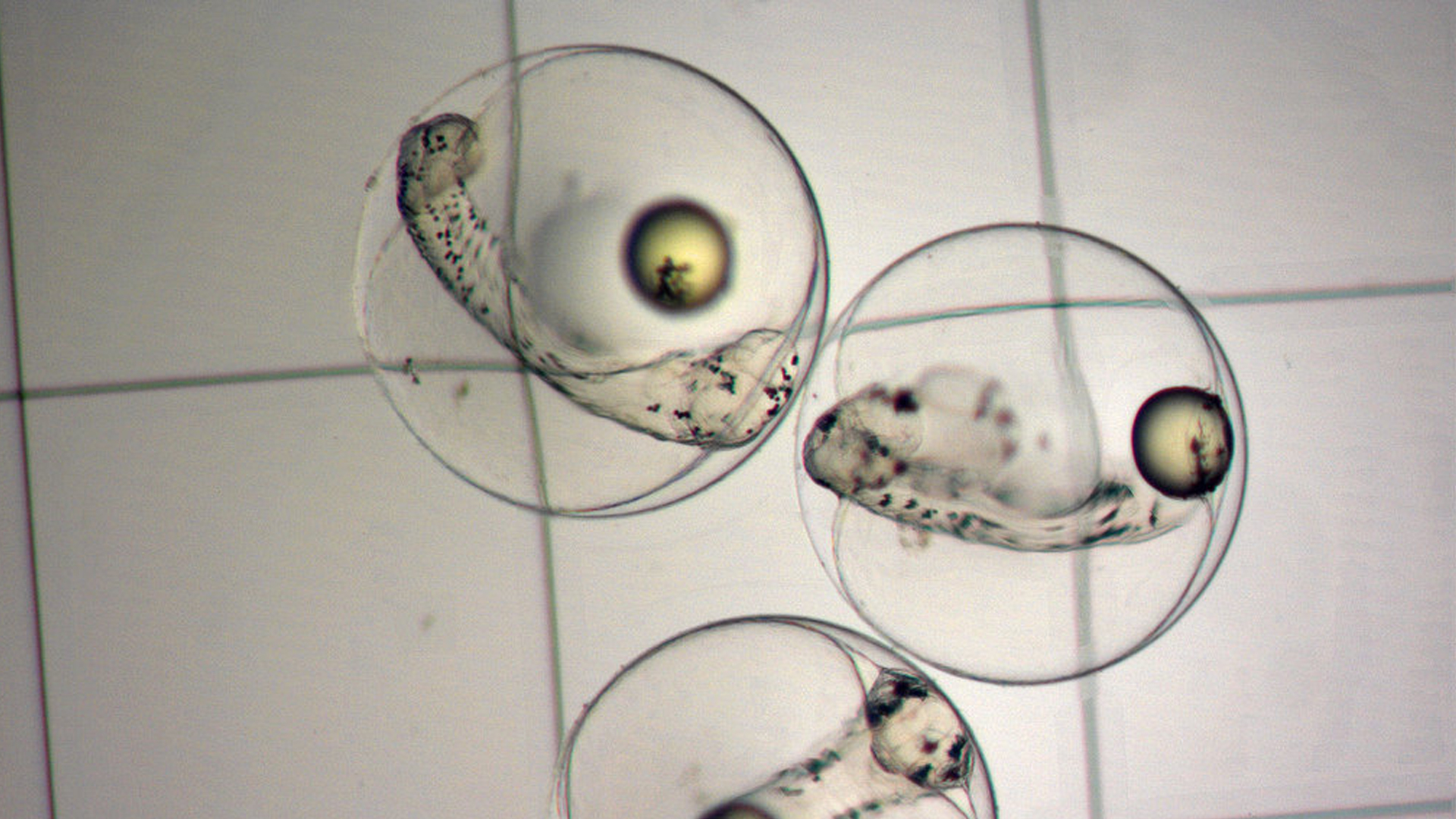 At the lab, floating embryos were carefully decanted from the surface of the bucket and homogenized in roughly 6 liters of clean seawater. The embryos in each liter of water were counted to make stocking the larval tanks easier. Larvae were reared in 13 liter, 60 liter and 350 liter tanks and stocked at 15 – 30 larvae/ liter. First feeding is initiated 2-3 days after hatching when the larvae measure ~ 2.8 mm total length.  Initial larval rearing trials utilized rotifers and copepod dominated wild plankton to observe maximum production potential. Rotifers were maintained at ~ 5/mL and copepods were stocked at ~ 2/mL every other day. . Live or pasteNannochloropsis oculata was used to tint the water during larval development. On day 15 newly hatched Artemia was added to the diet and greenwater was discontinued. At 20 days, rotifers were removed from the diet and 24 hr. enriched Artemia was added. Metamorphosis began near 25 days and extended until day 31 when all individuals displayed post metamorphosis morphology and behavior. At 20 days, a dry diet was introduced and Artemia was removed from the diet by day 35. Survival in these initial trials ranged from 43 – 85%. This is fantastic survival and resulted in a 350 liter tank, stocked with 4,000 embryos, producing over 3,200 juveniles. 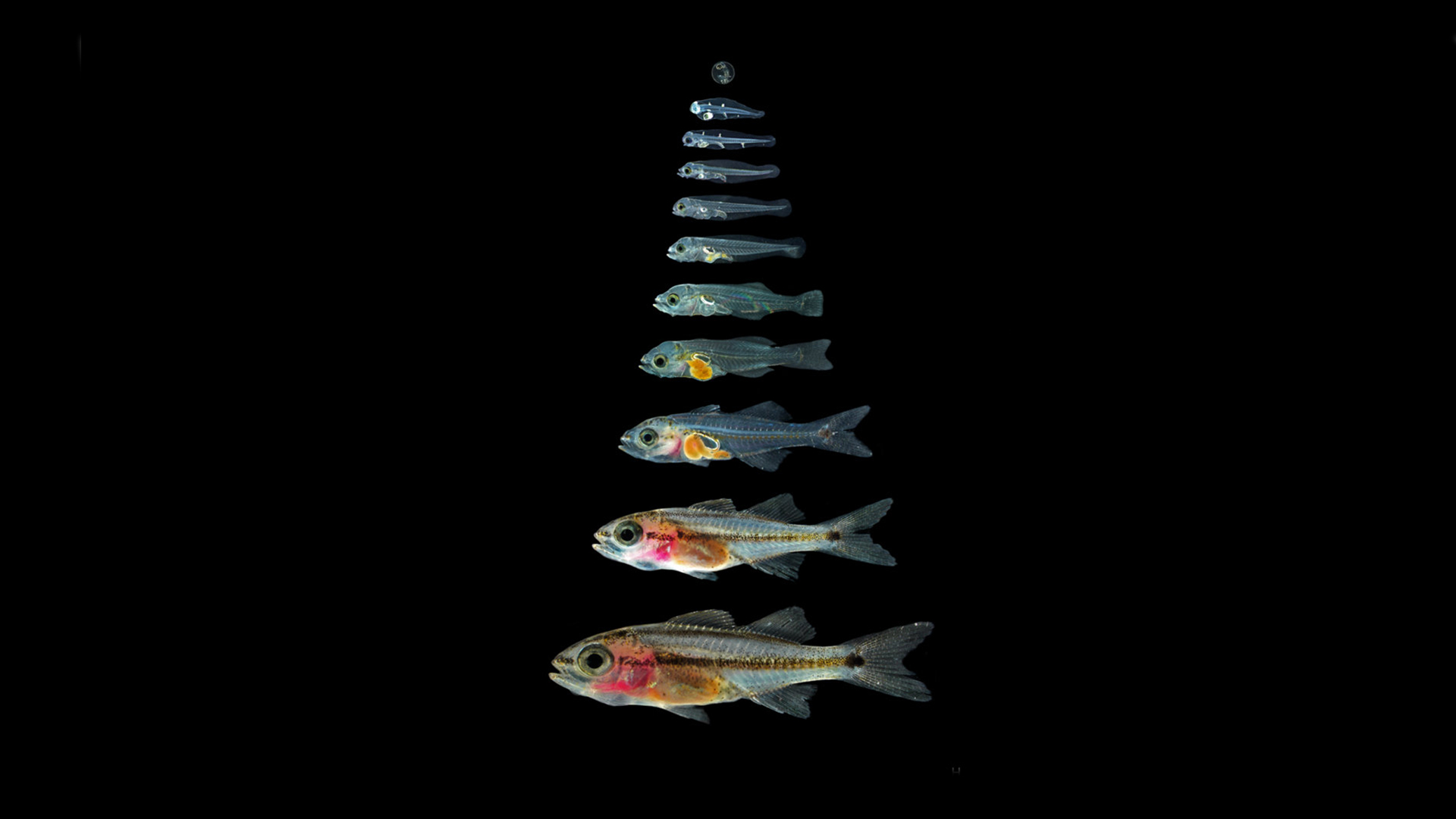 Larval development of French Grunt from hatching to metamorphosis. Photo by Matt Wittenrich

In later trials, we found minor differences in growth and survival with cultured rotifers and copepods. Metamorphosis-stage fish were sensitive to shock from dietary HUFA deficiencies when fed un-enriched rotifers. This problem was often so severe that simply bumping the tank or walking too quickly towards it would result in near immediate death of dozens of larvae. This problem was not observed when prey was enriched with 2 x daily HUFA enrichments. Early juveniles were moved to 800 liter growout tanks at day 40.The French Grunt is well suited to commonplace aquaculture techniques. The larvae are large at first feeding and readily accept rotifers as an initial diet. Post metamorphosis growth is rapid with juveniles reaching 2 inches in just under 3 months.