From our previous examinations we knew that nauplii of the copepod Parvocalanus crassirostris could be used as a first feed, however, in clear water only about 50% of larvae were feeding. After exploring the literature, I decided to test a variety of parameters including algal turbidity, prey density, prey selectivity, tank size, light intensity, and stocking density in order to increase feeding performance. 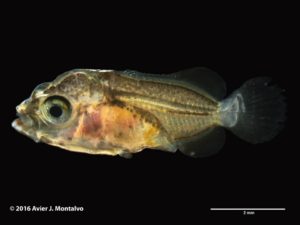 From these studies I initially learned that the milletseed butterflyfish do not identify rotifers (Brachionus plicatilis) as prey throughout larval development. Additionally, testing revealed that different stocking densities, light intensities, and tanks sizes didn’t have a significant effect on feeding incidence or performance of the larvae.  However, what did enhance feeding was the addition of algae (T-ISO) to the tank; which increased the feeding incidence to about 90%.  Another interesting result was that feeding incidence was the same at 1 individual/mL as at prey densities up to 20 individuals/mL.