One of our early rearing successes occurred with the Schooling Bannerfish, Heniochus diphreutes (See post titled “Schooling Bannerfish…so close”).  Although none made it beyond metamorphosis, we were able to get them beyond the first feeding phase.  Due to their unique coloration (see picture) and the use of PCR technology we were able to determine that they were selecting Oithona colcarva nauplii as first feeding prey items.  Oithona spp. are marine cyclopoid copepods that typically inhabit nearshore and/or estuarine waters. Furthermore, they are often identified in the guts of wild marine fish larvae and juveniles.  So it came as no surprise that observed larvae would be selecting them as prey items.  Most of the copepod research focuses on examining those from the taxonomic orders Calanoida and Harpacticoida.  However, some work has been done on cyclopoids (ie Cyclopoida) and most have great potential for culture and feeding to marine fish larvae.  Oithona specifically has a very small 45 micron nauplii (see picture) and is thought to have a weak escape response.  These traits are perfect for the smaller marine fish larvae that we are targeting; including Schooling Bannerfish. 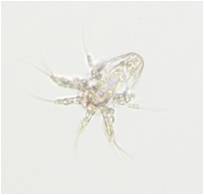 Once identified, we collected a large portion of zooplankton to begin the isolation process.  We sieved the zooplankton to target the size range we wanted; adult females between 150 and 200 microns.  We knew from previous experience and others research that eggs are attached to the female’s body (see picture).  One by one we pipetted those females from the sample and into a new tank, careful not to bring any other bugs along with them.  Each female has 10-20 eggs which would eventually hatch, so it didn’t take long to build a significant population of 1000 or so newly hatched nauplii.

Currently they are kept in a co-culture with a small rotifer species (Colurella adriatica) we are working on, which I’ll talk about in a future post.  It appears that the adults and copepodites need something more substantial than microalgae to thrive, whereas nauplii prefer microalgae.  Although I’ve had trouble maintaining a population just on a mix of Isochrysis galbana andNannochloropsis oculata; whether they can be grown solely on a microalgae is unknown.  More research needs to be done to determine the optimal culture protocols, but they’ve been in continuous culture here at the lab for a while and have great potential as a live feed. Schooling Bannerfish broodstock have recently been received here at the lab and experiments feeding larvae should begin as soon as spawning is detected.