Happy New Year from all of us at the Tropical Aquaculture Lab! 2012 is sure to be an exciting year and we are thrilled to be able to share some news so soon in the new year. We have lots of updates and images coming soon so be sure to check back.

A couple months we were elated to see angelfish larvae developing in the green tinted water of one of our larval tanks. Today, we have over 25 angels growing nicely in a few different tanks. We are starting to see them regularly in shipments of eggs from the Columbus Zoo and Aquarium. After identifying a few important species of copepods (namely Oithona and Paracalanus)  survival rates seem to be headed in the right direction. Good news for some future projects!

Early on we knew they were angelfish, but didn’t know what species. We used molecular techniques to find the identity of a single late-stage larval specimen that we sacrificed for a photograph. From here, we assumed all the angelfish in our midst were semicircle’s (Pomacanthus semicircularis) since they all looked about the same. We noticed subtle differences in growth rates and banding patterns, but attributed this to overall species variation. After all, in a batch of dottybacks, blennies, and just about any other species I can think of remarkable variation in growth is usually observed. Over the past month, we have been waiting for the juveniles to turn blue and show the typical juvenile coloration most of us are familiar with. A few weeks ago we posted with excitement as some of the juveniles developed blue edges around the pelvic, dorsal and anal fins. We thought the full-blown fluorescent blue color was a short wait away.

Over the past few days, however, I have been staring into the growout tanks with perplexed eyes. I am suddenly rethinking the identity of our fish. I think we were wrong to assume that all of our angels were semicircle’s. I love being wrong some times since in this case it means we may have raised a second angelfish species.  Semicircle’s aren’t the only angelfish species spawning in Ohio. While talking with Ramon Villaverde of the Columbus Zoo the other day I learned that we may have raised bluering angelfish as well. Ramon has observed courtship behavior in their bluering pair and thought they were indeed spawning in their exhibit. 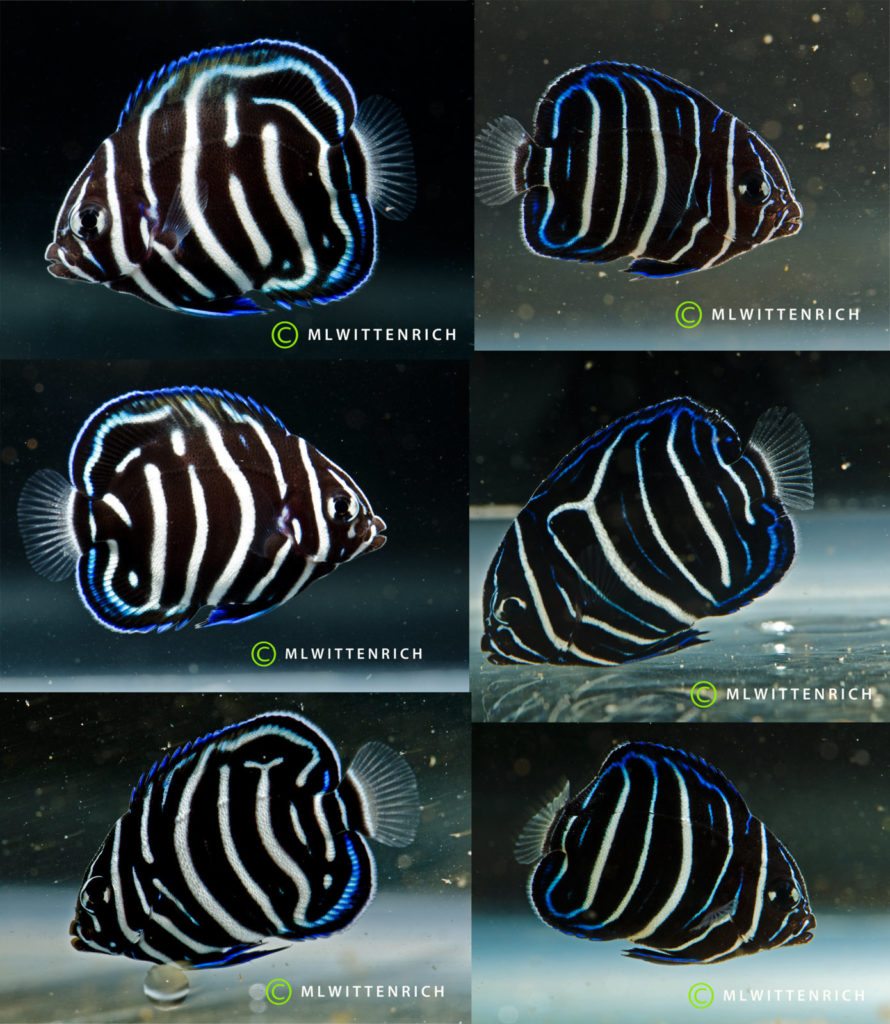 The image sequence above shows variation in color and pattern in a small sample of angels from one of our growout tanks. I can tell you what I think, but I want to hear from you. Do you think we have a second angelfish species?
Matthew L. Wittenrich, PhD | Senior Biological Scientist
Tropical Aquaculture Laboratory | University of Florida
Tags: semicircle angelfish