The new larval rearing room at TAL; showing the  120 Ltanks used to grow octopi in.  We’ve also recently tested
our fish species in them which we’ll talk about next time.

At the Tropical Aquaculture Lab in Ruskin, we’ve been running into lots of bottlenecks in the early larval development of some of the Rising Tide species we’ve been working on.  We believe these issues were exacerbated due to our current larval rearing systems being inadequate to provide the pristine water quality necessary for larvae to survive.  Because of this, we’ve spent the past several months upgrading our facilities, to what we believe will be an important step toward significant advancements in captive raised marine ornamentals. 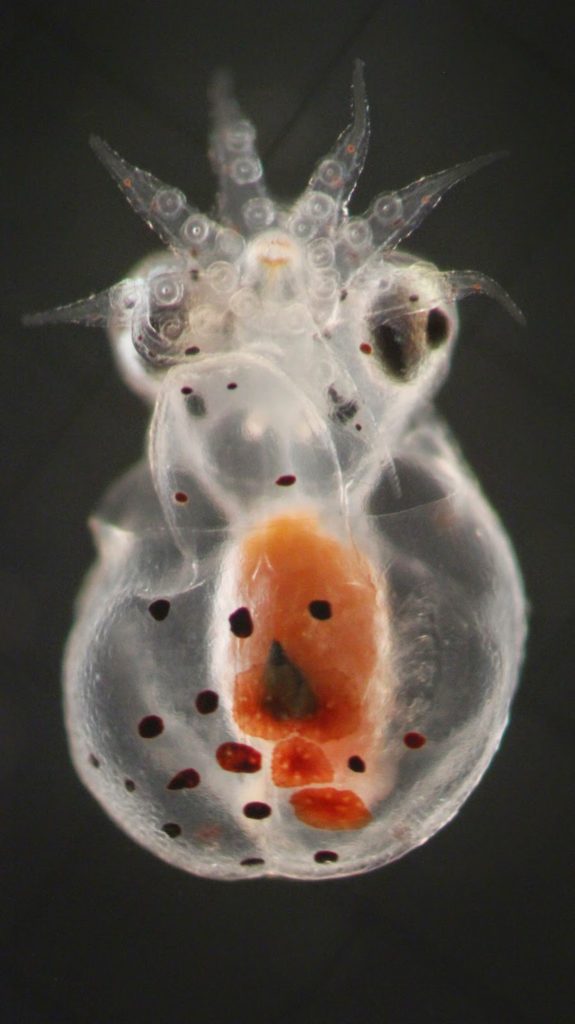 Upon nearing completion of the new system, we were approached by Mote Marine Laboratory’s cephalopod specialist Brian Siegel; their common octopus (Octopus vulgaris) had spawned, and they were curious if we would be interested at giving them a go.  Rising Tide’s focus is primarily on the captive propagation of marine fish species, but we thought this would be a great way to test out our new larval rearing system.  Common octopi have been reared in captivity at several institutions around the world, but with very low survival, believed to be due to poor water quality and nutrition. We’re hopeful the improvements we’ve made to our system will allow us to have some success with these challenging cephalopods.

Common octopus paralarvae have a voracious appetite for crustacean zoea in their natural environment, and have been successfully reared by substituting with Artemia nauplii as a prey item throughout development.  By providing them with a constant supply of pristine seawater along with microalgae and Artemia nauplii, we’ve reached 28 days post hatch today. We’re hopeful they will remain strong enough to survive to settlement.