Mature pair of crested oyster gobies. Male above, female below

The field of marine ornamental aquaculture is truly unique. Unlike food fish aquaculture or pearl farming where end consumers gain a product bearing little resemblance to the live, cultured form marine ornamental aquaculture promotes the use of live, healthy fish for display and education. The aquarium industry has come a long way over the last few decades, and through a greater understanding of systems and species as well as technological advances in filtration systems end users commonly maintain these animals alive and healthy longer than their recorded lifespan in the wild. Aquarium enthusiasts, fueled by passion and curiosity, have thus contributed endless amounts of information regarding the captive care and culture of marine fishes. As the hobby of marine fish propagation grows so too does the information gathering and expansion into new species. Research and development necessary to bring new species into culture is often the most costly and time consuming task associated with expanding production. Aquarium hobbyists have played an integral role in bridging the gap between research and development and commercial production of new species. Commercial culture of the crested oyster goby, Cryptocentroides gobiodes is a fantastic story and a great example of hobbyist involvement.

Amy Drehmel, an accomplished breeder from South Carolina purchased three adult crested oyster gobies from Tideline Aquatics, her local aquarium shop, shortly after they became available in 2010. An Australian endemic, the crested oyster goby is rarely collected for the aquarium trade, likely due to its shallow, muddy, estuarine habitat and commands a high price when available. Amy’s initial investment for the fish was just shy of a car payment.

At the time, very little was known about the natural history of the species, how to tell the boys from the girls, how to initiate spawning, what to feed them, and how to approach larval rearing. Amy was one of the first aquarists in the U.S. to rear watchman gobies so she had a pretty good idea of what to expect.  Amy quickly succeeded in being the first person to raise this new-to-the-trade species in 2011.

At the Tropical Aquaculture Laboratory, we received eleven first generation (F1) offspring from Amy early last year (2012). The fish were immature and divided into two 20 gallon aquariums with plenty of PVC pipe and oyster shells to make them feel at home.

Sexual maturity of our F1 offspring was reached in 180 days. Mature fish in good condition exhibit subtle traits of sexual dimorphism. Males are typically larger than females and exhibit enlarged first and second dorsal fins with brighter coloration. The first few rays of the first dorsal fin is elongated and pointed in males. Males display a somewhat more robust head and are overall lean in appearance compared to the rotund belly of females. Males can be aggressive toward conspecifics in small tanks and outside of reproductive periods. We recommend that groups of 6-8 fish be housed in 25 gallon (~100L) and larger aquariums at a ratio of one male to three or four females to diffuse aggression.  Spawning occurs from 73-82F with a photoperiod of at least 13 hours of light. Feeding should consist of at least two daily feedings of commercial gel diets with frozen squid, shrimp, and fish flesh.

PVC sections containing eggs are removed from the guarding male in the broodstock tank 4 days after spawning. The PVC section is affixed vertically in the rearing tank with an airstone placed below. A steady stream of air is allowed to pass directly over the eggs to keep them in constant motion and facilitate hatching under dark conditions. Under these artificial conditions, if the air flow is too low or the bubbles do not come in direct contact with the eggs they will often fungus and fail to hatch. Hatching occurs roughly 30 minutes after the lights have been turned out.

Larvae have been reared in 13 L, 25 L, and 60 L black round tanks, glass aquariums, and commercial buckets.  After hatching, the air flow is turned down to approximately 100 mL/min. Larvae exhibit a strong feeding response under normal fluorescent lamps (6500 K double lamps) suspended 10 cm above the surface. First feeding is initiated the day after hatching when the larvae measure 3.2 mm in length.  Rotifers (Brachionus plicatilis – 200µm lorica length) are stocked at 5-10/mL as an initial diet.  Larvae tend to stack against the sides of the rearing tank until live phytoplankton or algae paste is added to the tank. 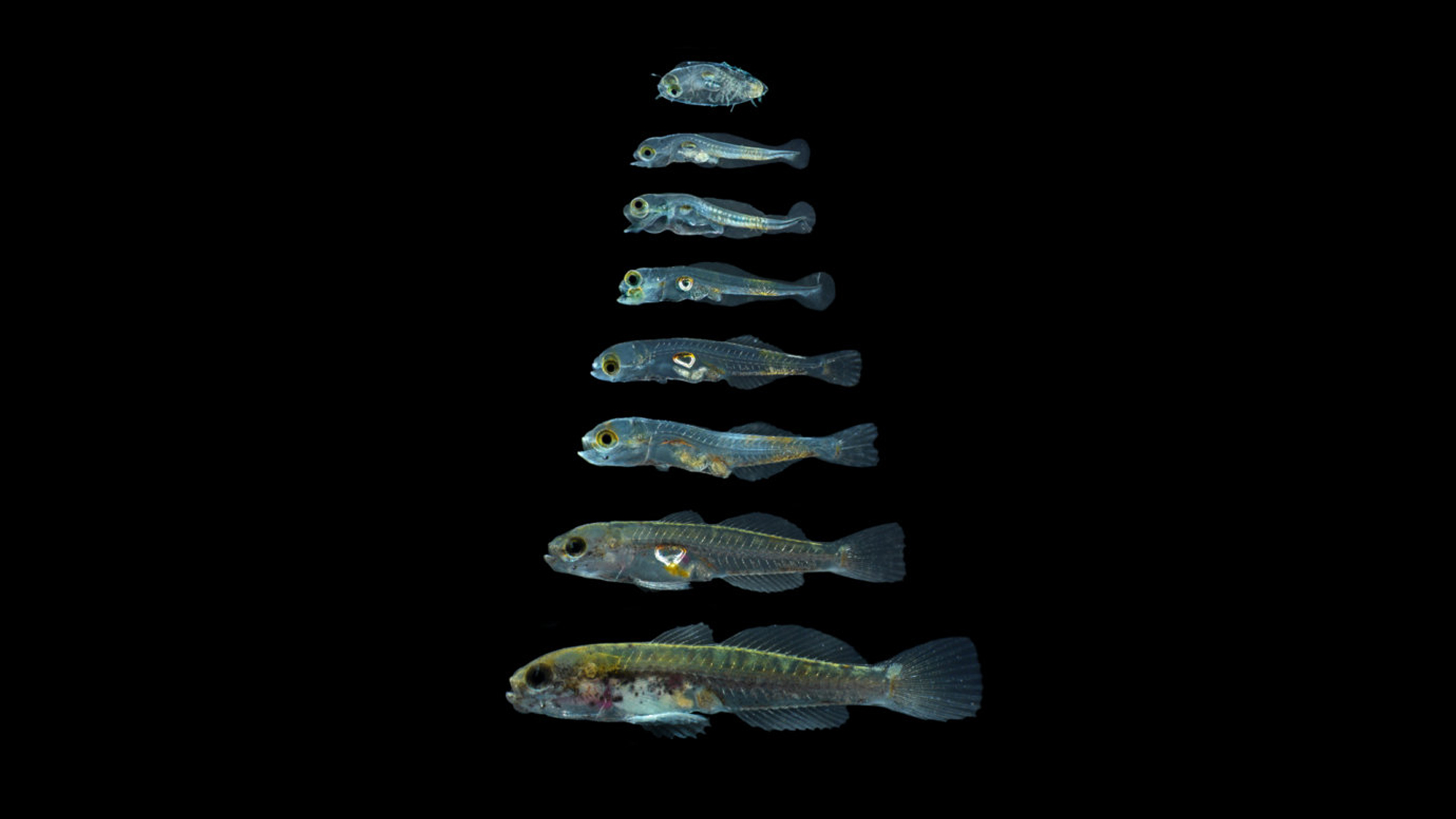 Larval development of crested oyster gobies from egg to settlement

Aeration is increased slightly at 3 dph (200 mL/min), which seems to help maintain water quality and aids feeding performance of larvae.  At 5-8 dph, Artemia nauplii are added at a density of 0.5-1/mL. Aeration and water exchange is increased sequentially as the larvae grow to maintain high oxygen levels and reduce waste build up in the tank.

Metamorphosis occurs between 13 and 16 dph when individuals undergo morphological and behavioral changes that, upon completion, result in a benthic juvenile. Upon completing metamorphosis, the juveniles are approximately 12 mm in length, a light tan color and active on the bottom of the tank. At this point, juveniles are weaned from Artemia nauplii to dry pellets (0.5 – 1 mm). Larval survival to the juvenile stage is typically higher than 80% although some runs seem to produce near 100% survival.

Although this species is most often reported from cooler, subtropical waters spawning, egg development, larval rearing, and juvenile growout occur unhindered in water temperatures ranging from 73 to 83F.

A culture protocol for the species, as well as broodstock animals are currently being produced and disseminated to commercial producers.  One commercial producer has already produced offspring that should be available to the trade soon.  From hobby to production…in the span of three years, three generations of crested oyster gobies have been produced, fine-tuning a protocol that has been used to get this species into commercial production.