With nearly a million specimens imported into the United States each year, the green chromis, Chromis viridis, may well be the most popular fish in the marine aquarium trade (Rhyne et al. 2012). It is the most highly collected fish species appearing in the trade, beating out blue damsels by nearly 200,000 per year into the US (Rhyne et al. 2012). Although green chromis are widespread throughout the Indo-Pacific region and their populations probably in little threat of over exploitation, collection and transport methods are thought to claim high mortality through the chain of custody. Despite their popularity, little progress has been made in culturing this iconic species

To our kowledge, the only successful rearing of green chromis was done in India by Gopakumar et al. (2009). In this study, they housed broodstock animals in roughly 480 gallon tanks. Larvae were reared in 1,200 gallon tanks that were previously seeded with two copepod species and phytoplankton and allowed to bloom.  Using these semi-extensive methods, researchers obtained ~5% survival.

Recently, University of Florida’s Tropical Aquaculture Laboratory claimed its first victory in rearing green chromis from cultured live feeds produced on site. We received a few sporadic batches of green chromis eggs from SeaWorld, Orlando in 2012. From these early trials, we were able to identify what the larvae were feeding on. We then isolated a key copepod species and worked extensively to isolate and culture the copepod in high enough numbers to be used as a sole diet through larval development.

The broodstock animals are housed in the large Manta Reef Exhibit at SeaWorld, Orlando. Green chromis are generally open water swimmers feeding on zooplankton as it passes in the currents. When the fish are spawning, however, males will fall out of the schools and settle on the bottom to set up and defend short term breeding territories.  Justin Zimmerman and his team at SeaWorld look for this as a signal of breeding behavior and keep a close eye on the spawning substrates for eggs. At SeaWorld Orlando, the fish spawn on dead Acropora coral branches, which are plucked from the exhibit and transported to the Tropical Aquaculture Lab in small buckets. 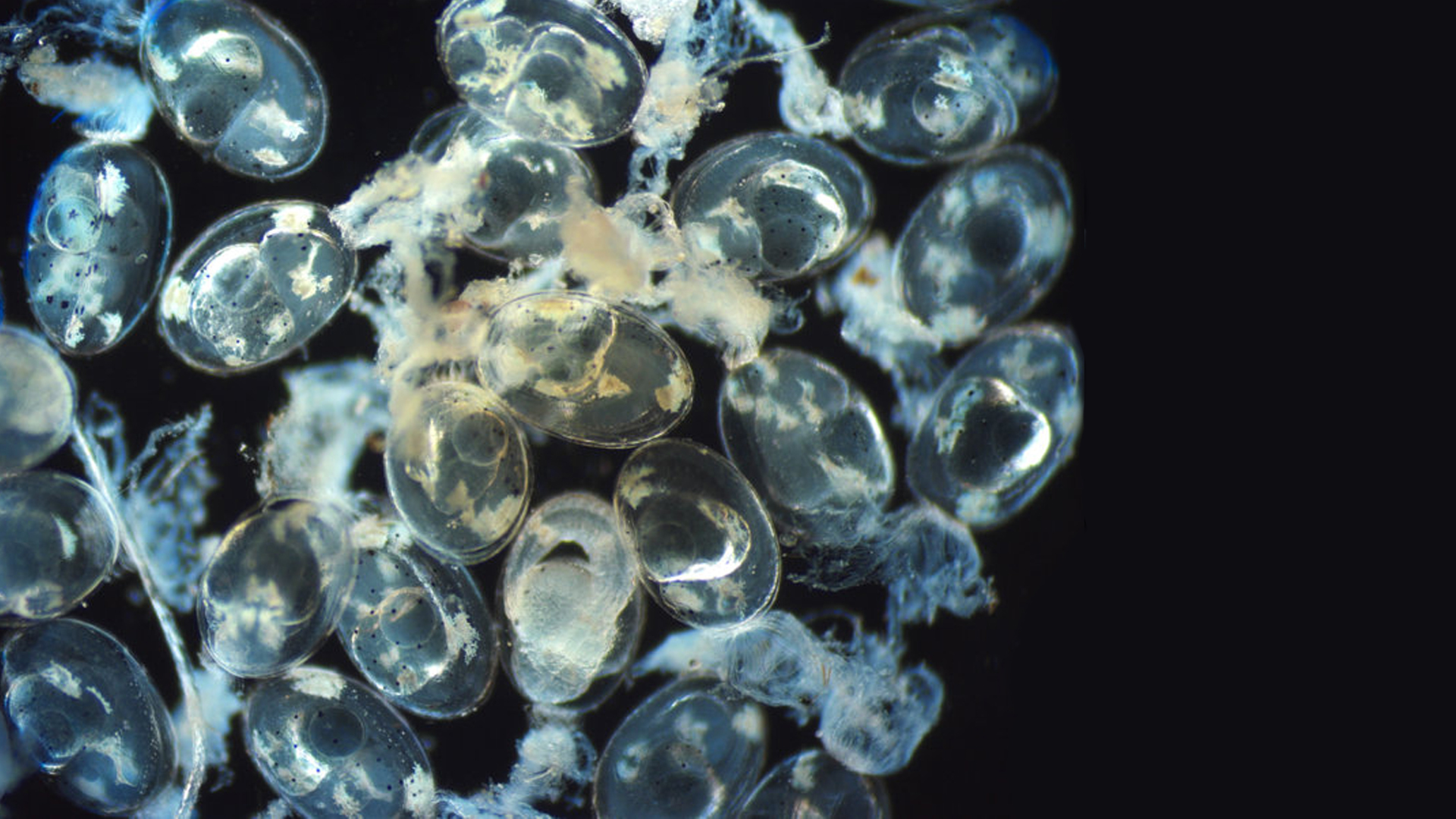 At the lab, the coral branches are rubber banded together at the bases being careful not to damage the delicate eggs. They are suspended in the water column with fishing line and supplied with a strong flow of air from a 6” airstone placed on the bottom of the tank. The airflow keeps the branches and the eggs in constant motion, which is needed to mimic the action of the tending male and facilitate hatching. Hatching occurs on the 4th night after spawning.

Unlike most damselfish, green chromis larvae are underdeveloped at hatching and lack pigmented eyes, a functional mouth and gut. At slightly more than 2 mm total length, the larvae subsist on protein and lipid rich yolk reserves that fuel development in the upper water column. Two days after hatching, the larvae are ready to feed, and must be supplied with tiny copepod nauplii to survive. Chromis larvae, in our experience, are highly selective in choosing their zooplankton prey. We offered cultured Oithona colcarva nauplii at a density of about 3/mL. The first feeding stage of marine fish larvae is typically characterized as the stage prone to the highest levels of mortality. We experienced little early mortality since the larvae fed aggressively on the cultured Oithona. Bottlenecks to culture developed after day 10 and 15 when the larvae required sequentially larger copepod prey. Flexion occurred near day 15, which was accompanied by our highest mortality rates. At this stage of development larvae undergo dramatic changes in morphology and reorganization of the gut. We suspect that mortality here is attributed to insufficient nutrition through early development.

Metamorphosis is slow from here and by day 35 the tiny juveniles measuring 10-12mm become more bottom oriented and display the schooling behavior so common to the species. The characteristic blue-green color is evident by day 40. Our first successful run resulted in just over two dozen juveniles. We are currently working hard to expand copepod production to supply copepodites and larger copepods as the larvae grow.

We are extremely proud of this accomplishment, partly because of the huge popularity of the species and partly because of the methods employed to overcome bottlenecks and achieve success. Determining what green chromis larvae consumed during first feeding was instrumental in our success. Isolating and culturing the live feed organism, while certainly challenging, proved successful. 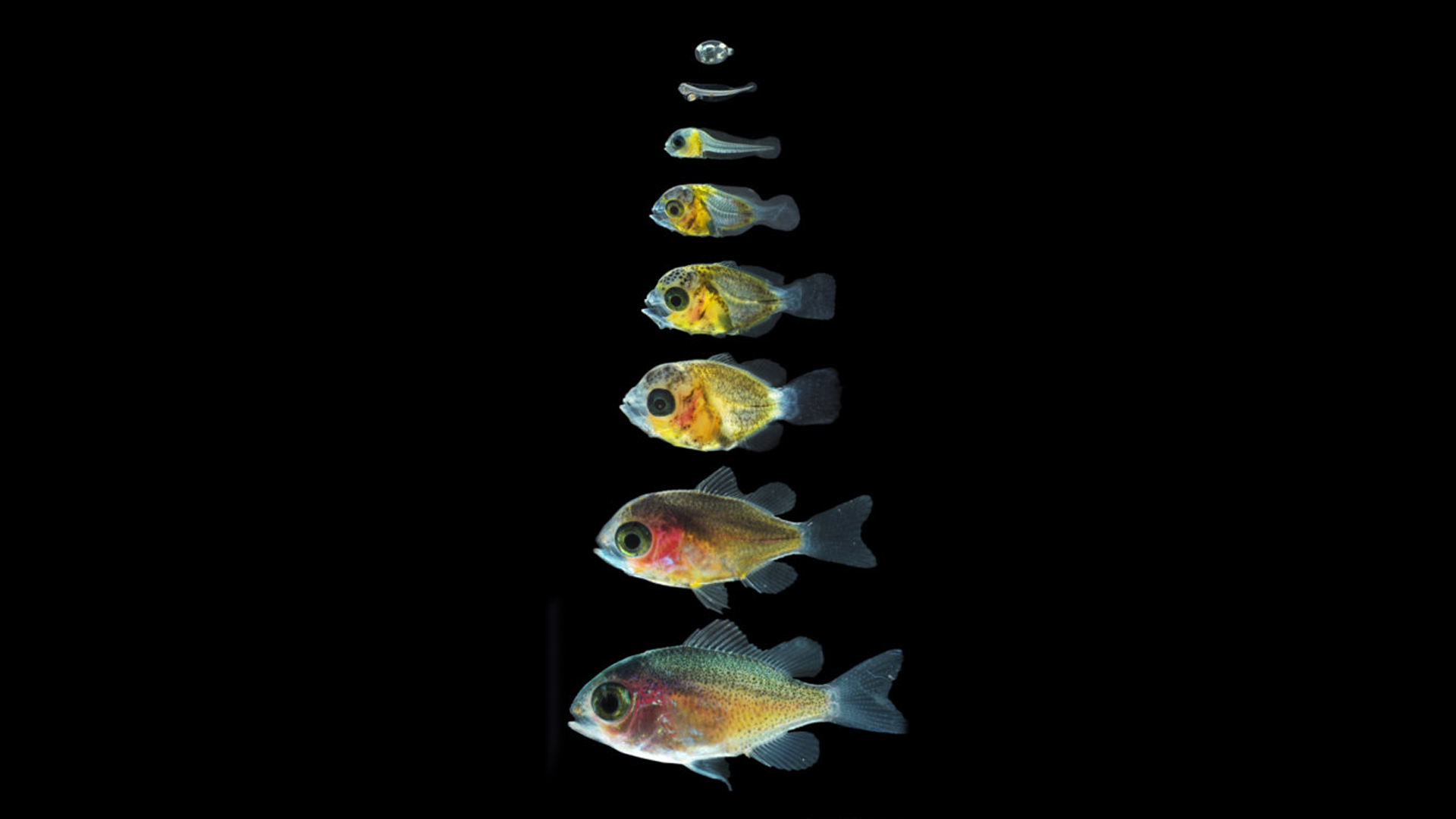