After graduating from Florida Institute of Technology with my PhD I needed a break from papers and writing. I decided to spend some time in the water, just lying on the bottom watching fish. Since my initial success with raising large numbers of green and spotted mandarins in 2007, dragonets have crept to the forefront of my research motives. I have learned volumes about their reproduction and larval development, and have succeeded in raising the 4 species of dragonets common to the aquarium trade: green mandarin (S. splendidus), spotted mandarin (S. picturatus), ocellated dragonet (S. ocellatus) and the starry dragonet (S. stellatus). While raising these fishes I noticed many peculiarities during larval development that fascinated me. I wanted to learn more and see if some of these trends were conserved across the diversity of the family. 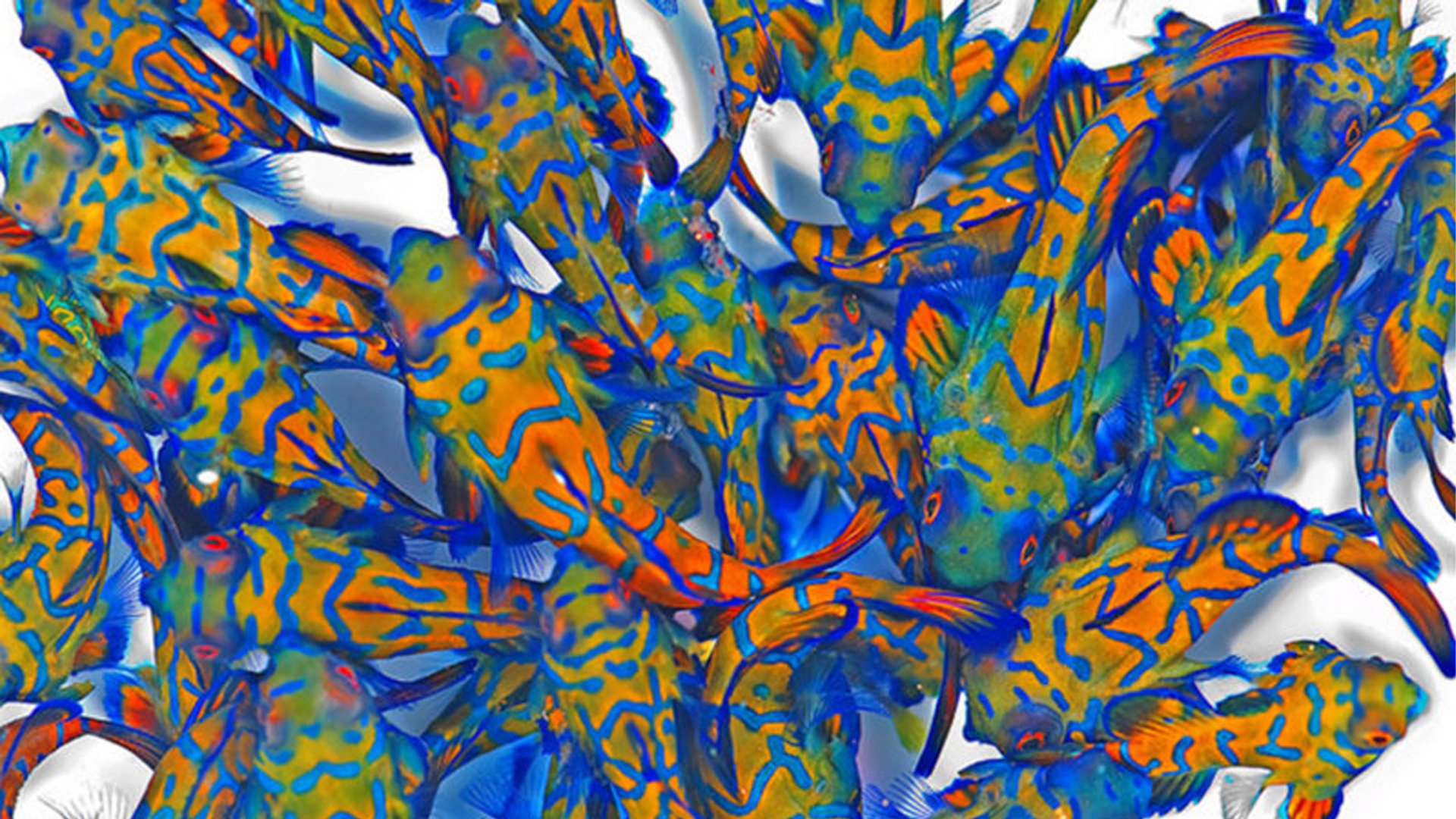 A group of Captive Bred Synchiropus splendidus; proof that large-scale production was possible and motivation to pursue their commercial culture. Mandarins are now in commercial production at Oceans, Reefs, and Aquariums.

Of the 130 species of dragonets found worldwide only two are found with any regularity in the shallow waters of the Caribbean, the lancer dragonet (Callionymus bairdi) and the spotted dragonet (Diplogrammus pauciradiatus). I wasn’t exactly searching for either one in particular and in all honesty had no idea which one I had found. When I eventually found a population of lancer dragonets I was embarrassed to see that they were in an area I had dove dozens of times. It turns out I just wasn’t looking hard enough. Lancer’s live in a peculiar habitat that, at first glance, seems devoid of life. The rubble fields and sea urchin barrens that stretch across much of the intercoastal waterways of South Florida are made up of loose rubble, broken shells, sea urchin tests, and debris. Variegated sea urchins (Lytechinus variegatus) wander these fields and are often the only relief that can be seen above an otherwise flattened seascape; a habitat that few sport divers would spend much time in.

A wild pair of Callionymus bairdi in the rubble fields of South Florida. The large male displays to a ripe female near sunset. 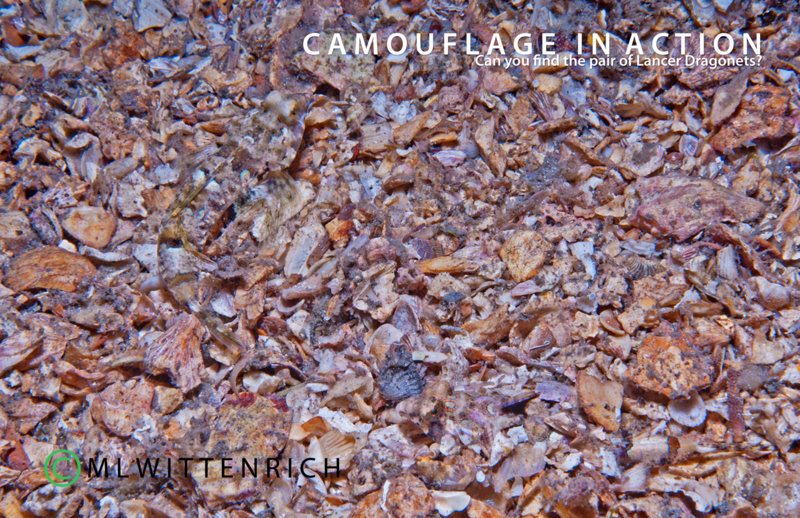 Callionymus bairdi in its natural environment relies heavily on its camouflage. Here, a pair rests in the rubble prior to courtship and spawning.Can’t find them? Scroll to the bottom to see where they are.

After observing these fish in the wild, understanding their mating rituals and spawning behavior I decided to collect a few broodstock animals for larval development work. I collected eight fish, a dominant male, subordinate male, and juvenile male alongside five reproductive females. I stocked all eight fish into a 30-gallon cube tank in my home office and watched as their new social hierarchy unfolded.

Spawning occurs like clockwork as soon as the bright lights go off and the actinic lights are on. The dominant male will spawn with all receptive females producing chains of pelagic eggs that float to the surface. The chains of eggs are easily collected with a plastic water bottle when the filters and powerheads are turned off. I was excited to work with lancer dragonets and thought it would be an easy species to work with…until I saw the first eggs that were produced. The 500 micron eggs had me terrified at first. There seems to be a magic number in raising coral reef fishes. Eggs that are over 800 microns are generally easier to raise. I had briefly played around with blueheaded wrasse eggs a few years ago that measured roughly the same size and I was unable to efficiently collect, hatch or attempt rearing the tiny embryos. Despite my apprehension, I started bringing the eggs into work at the Tropical Aquaculture Laboratory in the water bottles they were collected in. It took roughly 10,000 eggs before I started getting a handle on things and was able to hatch them in decent numbers. As far as I know lancer dragonets are one of the smallest marine fish larvae observed. The larvae hatch under a millimeter an grow to light over a millimeter at first feeding 3 days later.

Unlike the larvae of other dragonets that hatch out heavily pigmented and experience a rapid transformation from larva to juvenile, lancer larvae seem to have missed a memo. They hatch out small, and are relatively transparent for the first two weeks. During the first few runs I thought we had decent survival for the first two weeks. Using a flashlight I could see hundreds of tiny slivers of silver dancing in the beam, but then, 14 days later, they were gone. I searched over and over with the flashlight, but just could not find a single larva. Then, after two days of what I thought was defeat something caught my eye. A tiny dark colored larva flittered into view. The larvae had finally taken on dark maroon and black pigments that did not reflect the flashlight beam. They were there. Not a lot of them, but larval lancers nonetheless. The daily chores of plankton towing, feeding, water changes, and greenwater were getting old and the larvae just didn’t seem to be growing. Days and weeks ticked on and still the larvae were there, tiny and pelagic. By day 19 the larvae turned bright orange and by day 30 they looked like they could settle. But still, there they stayed, in the water column. A single dragonet settled to the bottom after 49 days as a pelagic larva. The number of settling dragonets increased daily and by day 59 about a dozen had settled. Another 10 larvae took an additional 10 – 15 days to complete the transformation. 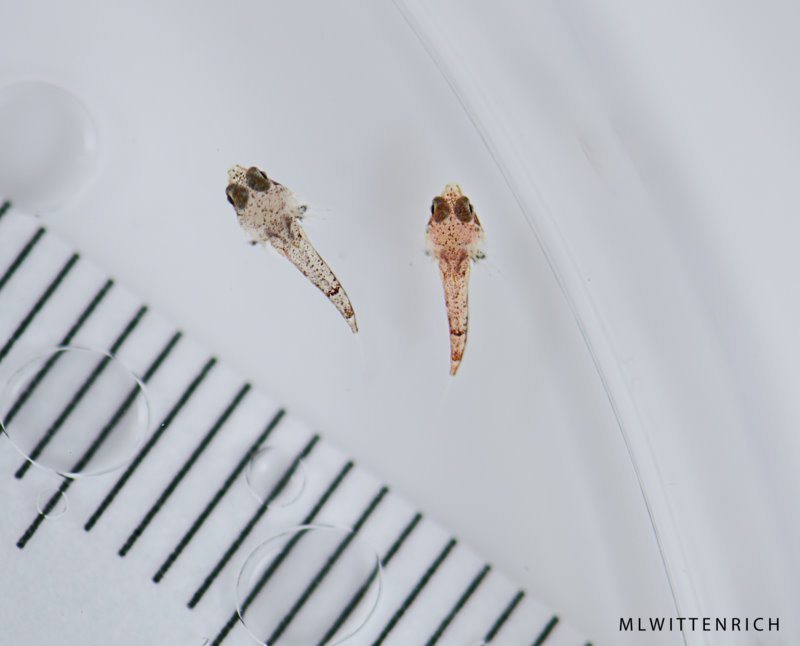 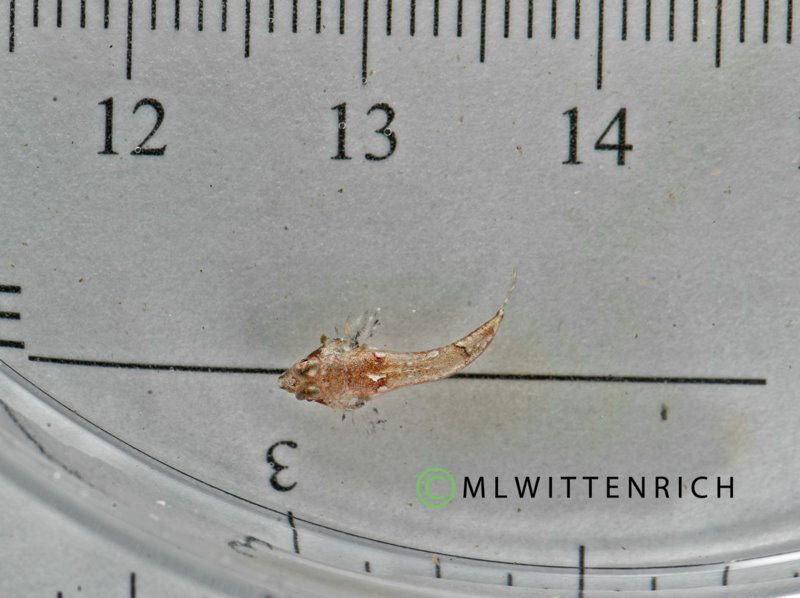 Juvenile C. bairdi at 128 days. Nearly an inch long and beginning to resemble the adult.

Lancer dragonets have proven to be one of the most humbling species I have ever worked with, but contribute yet another valuable piece to an ever growing puzzle. At the University of Florida we are using the lessons learned with lancers to move forward with other pelagic spawning species. 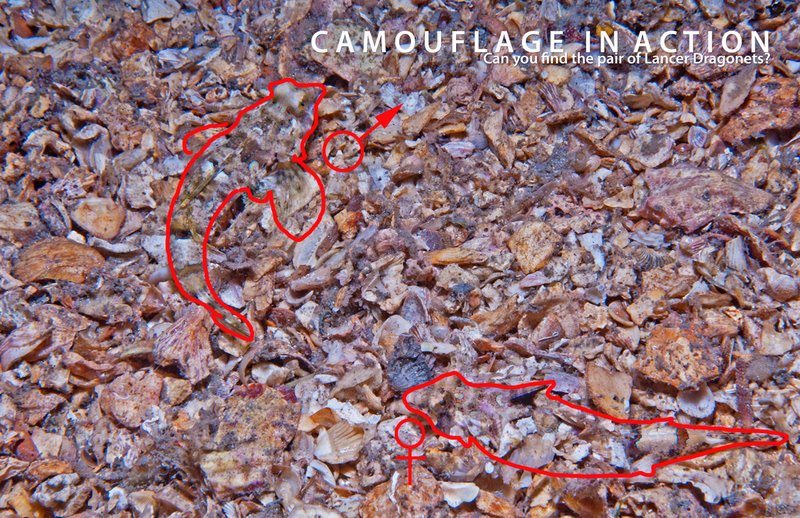 If you thought that was hard try finding them in the wild!

Success with a model species – the ocellated dragonet