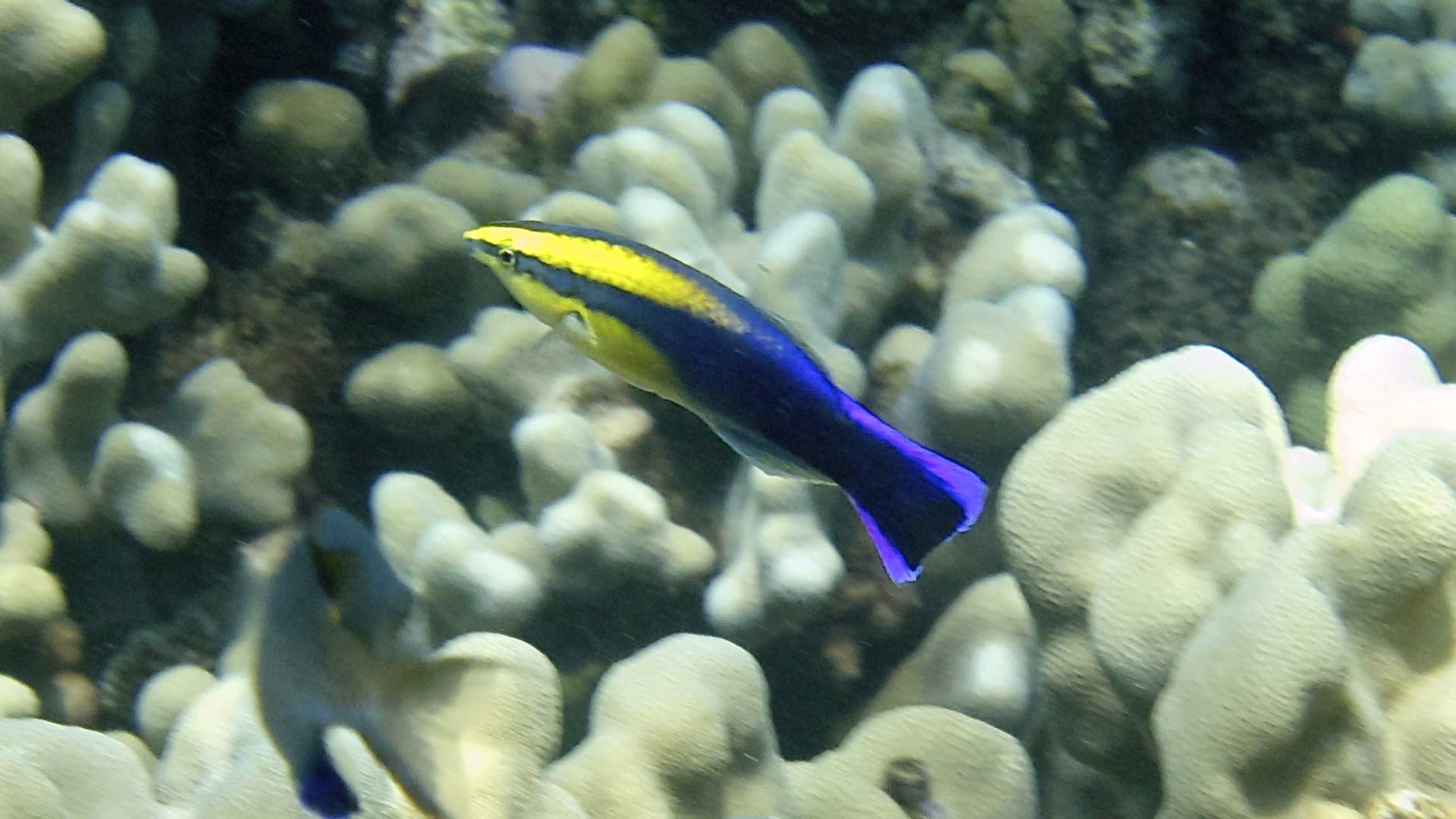 Egg collectors were deployed on the afternoon of 4/17/16 and collected on the morning of 4/21/16. There was a total of 32,900 eggs with 70% viability. This was the highest number of eggs collected to date. The eggs were stocked at a density of 23.03/mL in a 1,000L flow-through tank. The average rearing parameters for this collection were: 26.8 ± 1˚C and 30.0 ± 0.8 ppt. DO was maintained ≥ 6.0 mg/L, and pH ranged from 7.6 – 7.8. Most of the larvae Avier examined had well-formed eyes, mouths, and guts, with the yolks fully absorbed. The first feeding of copepod nauplii and background algae was provided. It looked like larvae were either Acanthurid (tang) or Chaetodontid (butterfly). At approximately 30 dph there was a different larva. A very different larva. Pictured at 35 dph, at approximately 8.80 mm in length, was a long and slender larvae, spending most of its time around walls of the tank, picking prey items off the side. The larvae had very well developed eyes, and a fully formed mouth and gut. It did not have a very deep body, but it did have well-formed fins, with blotchy speckles of pigment starting to develop.

The larva was elusive but it showed up again while Avier was cleaning the bottom of the tank a few days later. A brightly colored neon blue streak shot up towards the surface of the tank! He caught the specimen and examined it under the microscope. It was a completely metamorphosed fish. But which fish?? The little guy was moved into a 200L flow-through tank with settled fish from another collection. Pictured at 41 dph, at a length of 13.88mm, the mystery fish had a neon, multicolored strip running from its head to tail, fully developed fins, and a round but slender body dark colored body.

It was  a  Labroides phthirophagus, the Hawaiian Cleaner Wrasse! It was voraciously feeding on enriched artemia, frozen cyclopeeze, and flake. Interesting tidbit, this individual started exhibiting its cleaning behavior at 44 days post hatch (and the other fish in the tank did not like it!). There is a single mated pair in the entire mix species tank. That pair produced an egg that produced a larva that turned into this fish. This fish is the first of its kind to be reared in captivity, and it has significant implications for the conservation. Pictured at 91 days post hatch,  the juvenile exhibited the narrow mouth, pointed head, and bright colors characteristic of this cleaner species. The multi-colored stripe changed to resemble the distinctive purple coloration found on the adults, and the dark colored body was now jet black.

The IUCN reports: Labroides phthirophagus inhabits coral and rocky reef habitats, other than within the surge zone. This species is an obligate cleaner, feeding on the crustacean ectoparasites of other fishes, probably including gnathiid isopods and also on fish mucus. While the population is not identified as endangered, the limited distribution of this fish makes them vulnerable to local environmental damage. As an aquarium fish, captive reared specimens that eat like locusts show great promise for the hobby.   Congratulations Avier on a job well done!!

Breaking The Internet: Check Out Our Wrasses! (safe for work)